Binoy and his ‘Mystic Himalaya Trekking’ team were thrilled when they heard back from Ruth confirming their trip to Nepal. Nicholas Everest and his family were visiting Nepal for the first time.

Now what would excite them so much about a trip they’d made a number of times before? Well, no doubt it’s the last name that stands out so prominently and more so of the fact that they are the descendants of the Welsh explorer and surveyor, George Everest. I met up with Nicholas Everest his wife Ruth, son Joshua and daughter Sophie Martin after they made their historic trip to Everest Base Camp. I was rather curious to know about the family name they proudly carried and about their relationship to the famous British surveyor and geographer.

The word ‘Everest’ is synonymous with the famous climb made by New Zealander Edmund Hillary and Sherpa Mountaineer Tenzing Norgay. However, very few know the actual history behind the global name. While most of us would rather not delve into the nitty-gritty of things that happened hundreds of years ago, there are others who would think quite the contrary. George Everest was the son of Tristram Everest of Gwerndale, Brecknockshire, and as born on the 4th of July 1790. He mapped the subcontinent from Cape Comorin in the South to the northern foothills of the Himalayas during the times when he was working on the Great Trigonometrical Survey of India.

George had four daughters and two sons. Two of his daughters died very young while gave up their name after getting married. Of his two sons, only one had a son, and he didn’t have any sons himself, so Everest’s direct line came to an end. However, he had four brothers – John, Robert, Thomas and Charles and a sister. This is what Ruth had to say about their family line – “Nick’s father said it was not through one of the brothers that our ancestry lies, but George’s cousin who was called John Everest from Greenwich. There are about four family trees involved in the ancestry, and even with all four, it is almost impossible to follow the links. Three other family names get involved through various marriages, for example Temple, chevalier and Martin”.

Bina Elizabeth Martin, apparently Nicholas’s fathers’s second cousin, published a book named Parsons and Prisons-Temple Chevallier Martin-1842-1933. Ruth told me it took her approximately 20 years to research and compile the book, which was published for private circulation amongst their family members. When I enquired about Nicholas’s forefathers looking at the family tree spread out over nearly three pages, Ruth tried her best to retrace those lines that linked them to the Everest clan, even though it was really difficult with so many family names and hundreds of years in between.

Ruth is married to the family and has always been fascinated by their family name and the fact that the world’s most spectacular mountain was named after Nicholas’s own ancestor was something she could not fathom.

She always dreamt of visiting Nepal and making it to base camp.

Finally, sitting in a rooftop café in Kathmandu in November 2009, decided she would turn her dream into reality. She returned to Taipei where she is working at Taipei European School and started planning for her trip to Nepal seriously.

Everest, in two syllables is the exact pronunciation used by George Everest and not the one that is more common to us. The fact that George Everest never actually saw the tallest mountain was confirmed by the family. Nicholas feels that the reason could be because of the lack of good equipment during those times. The equipment used in those days was heavy and clumsy even though George Everest was undoubtedly instrumental in redesigning the equipment when he was working as a surveyor in India. Before it got its actual name, Everest was otherwise known as Sagarmatha, and by its official name given by the Nepalese government, Chomolungma. The latter is recognized by Tibetans while the British were comfortable with Peak XV. It was officially christened by the Royal Geographical Society in the year 1865 when it’s height of 29,002 ft. (8,840 m) was first published. Andrew Waugh, the British Surveyor General of India recommended this name in honour of his predecessor George Everest. The former chief apparently never wanted his name to be incorporated as the name of the world’s highest and most captivating mountain. His plea seemed to have fallen on deaf ears as that name has now become a household word among nations as Waugh hoped it would be. 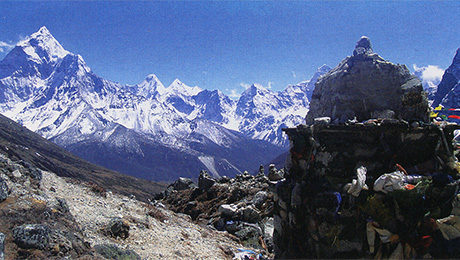 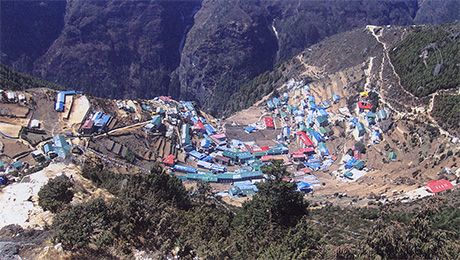 After more than a century, the descendants of George Everest visited Nepal and although they couldn’t make it to the actual summit, they made it to the base camp which was quite an achievement for them because they didn’t seem like the typical adventurous lot. Prior to their arrival, Ruth had done quite a bit of research on Kathmandu, unlike her kids who were a bit apprehensive about the trip. “We knew so little about the Himalayas before the trip, so we also found it fascinating, finding out about the culture and the way the people live their lives. Living a culture is always the best way to find out about it, and we all enjoyed this very much, “added Ruth. When her dream was finally realised, she had a personal, tearful moment of her own at the base camp. She had been successful in trying to unite the family through this trip.

“We’ve always been a close family, but it was nice being together for two weeks sharing such a fantastic experience.

One of the things that stuck to our minds was waking up in Namche Bazaar.

We arrived in heavy rain and cloud, but when we woke in the morning and pulled back our bedroom curtains, we all went ‘wow’ – how amazing is this scenery. We continued to say ‘wow’ about the stunning surroundings for the rest of the trip. Seeing Mount Everest for the first time was also amazing”. Josh reiterates, “With the crisp blue sky and a massive mountain in front of us, every day was wow”. For Nicholas it was more of a ‘laughter trip’ where they had a fun time with the family sharing jokes during those long tiring walks or sipping a cup of tea in cosy hotel cafes. Binoy and his team went over the top, designing a banner and a T-shirt for them. The banner was unveiled at the base camp, which read- “To Everest with the Everests”. The Everest family were simply overwhelmed and overjoyed at the kind of services they received during their brief stay in Nepal. Their visit according to them exceeded all expectations and whatever reservations they have had before they arrived in Nepal, totally changed by the end of the journey and they hoped to make a second trip in the near future.

The base camp was the final destination for the Everest but even at that height and just a glimpse of the peak changed everything for them. No matter how hard Ruth tries to unravel the ancestry linkage and despite the age-old debate about what the name could-have-been or should-have-been, the sight of the mountain still takes the breath away of the trekkers, who travel halfway around the world just to experience that ‘wow’ factor. The Everests are likely back to their daily lives now, but I bet their trip to Nepal and the trek to the base camp is something that they will cherish for the rest of their lives and that this story will be handed down for generations to come.

Binoy Rai is the Managing Director for Mystic Himalaya Trekking Pvt. Ltd, Kathmandu and can be reached at 9841541355/4374908, email- travel@mystichimalayatrekking.com

10 Awesome Things To Do In Kathmandu

5 Best Foods To Try In Kathmandu